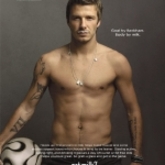 What  more could you ask for? Ok, let me explain…a
while back I was contacted by a representative of the David Beckham Academy to
do a review of a new hand held interactive game called MatchMaster, which is
associated with Beckham’s Academy.    This hand held soccer game
tests player’s ability to develop their performance by managing a daily
schedule and teaching children how training, eating right and rest leads to
better health and athletic performance.

I agreed to have my 10 year old, soccer playing daughter
and her best friend check it out.

More about their review in a minute…

First, I want to point out that in conjunction to the
kick off of this product that was released on June 1st exclusively at Wal-Mart
nationwide, MatchMaster is holding a sweepstakes that ends on September 1,
2008. The sweepstakes has prizes totaling over $150,000! Two Grand Prizes are 1)the
London Experience where you and up to four friends could win a chance to attend
a David Beckham Academy soccer course in England, round-trip airfare and hotel
included! Or 2)the Los Angeles Experience where you and your team could win a

chance to attend a three day soccer course at David Beckham Academy in LA,
round-trip airfare and hotel included! So register to win and let us know here
at Shakadoo if you are one of the chosen!

Back to the review…While heading out for a road trip,
the girls chose to accept my mission and review the game. They were both handed
their own to get familiar with. Since it was much like a toy called the
Tamagotchi that they have had dozens of in the past, it wasn’t long before they had the
basics down and became hooked.

Players must select their “Daily Routine Planner” during
select time frames, which includes choosing meals, training and sleep to
cultivate a stronger virtual player. These key elements encourage children to
maintain a healthy “Lifeline”, which can be directly related to their daily
lives, but in a fun and interactive way. The better coached player will perform
at a higher level during the seven interactive training games allowing them to
accumulate more points. Once the player masters the training games they can
test their skills against another player using one of the four Infra Red
challenges.

"It was awesome that we could play together!
That was the best part." Kaila

The game is designed for children 8 and up and is available
in royal blue and light blue for $19.96. Currently in soccer and hockey themes,
with more sports being considered in the future.