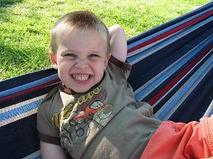 I would like to wish my middle son a Happy 4th Birthday! Not only is it his birthday, but it marks the most joyful day of my life. The birth of each son was a joyful experience, but Lou’s was special in its own way.

On the morning Lou was born, I got out of bed and my water broke. We went to the hospital and anticipated a long day of labor. Once I was there, they hooked up all of the usual monitors to me. My husband took my oldest son down to the cafeteria to get some breakfast, thinking there would be plenty of time.

All of a sudden, the monitors started beeping. The nurses came in and tried to readjust them but quickly realized that my son’s heart had stopped beating. They moved me around to see if that made a difference but it did not. At that point, they paged the doctor to come to my room immediately. My OB told me that I was going to have my baby now by emergency c-section.

It all happened so fast. They rushed me to the delivery room. I remember staring up at the bright lights on my way there and just praying over and over again to let my baby be okay. Shortly thereafter, I was awakened by the post-op nurse. The first words that registered through my foggy brain were "The baby is in the nursery". I cannot describe the immense feeling of relief that I experienced. I asked her many times after that if she was sure that he was okay and she reassured me that he was.

The reason his heart stopped beating was because the umbilical cord had tightened around his neck. I was so grateful to the hospital staff for reacting so quickly and saving my son. I was told later that he was born in the nick of time. I think I felt euphoric for weeks after his birth. Once again, I would like to wish my dear son a very Happy 4th Birthday!