Are your kids getting to the age where you need to start thinking about whether to "brace" them for the possibility of orthodontics?

Thirty years ago, many parents opted to pass on orthodontic treatments for their children. Financial limitations may have been the leading reason, or as in my husbands case, because he told his parents that he didn’t want braces (who ever does?) so they never pushed it with him.  He was the baby of 5 children so they were probably thrilled. He was a 14 year old boy at the time and obviously not capable of making such a decision that would later impact his life in a big way. It just wasn’t a necessity years ago.

But today there are so many choices when it comes to orthodontics. There are of course the traditional "railroad track" braces that most kids get at about age 12; there is the 2-phase orthodontic treatment that has gained quite a lot of attention in the past 5 years. The child usually receives the first set at around age 9  depending upon the number of baby teeth that still exist. They wear them for approximately a year, then get them off until enough adult teeth are in place to get them back on for the  last phase  at about age 11. By the time most kids are going into their full set of traditional braces for a 2 year period, the 2 steppers are getting out of theirs. This fact is undoubtedly a major factor in the popularity of 2 step orthodontics. Being the mother of a 9 year old and a 12 year old, I can tell you it is much easier on a 9 year olds self image, then it is on a 12-14 year olds. There is Invisalign, which uses a series of clear aligners that are custom-molded to
fit. The virtually invisible aligners gradually reposition your
teeth over an extended period of time. However not everyone is a candidates for this procedure. Then there is a newer orthodontic option called Fast Ortho. Which I will explain in detail later in the post.

Today, orthodontics seem less of a luxury and more of a necessity; they are almost a passage into adolescence. In a Country that is so appearance conscious, how could we not provide our children every opportunity to insure their self confidence and success?

But what about those children from 30 years ago that didn’t get the opportunity to correct their smiles? How does it impact an adult to get braces? I can tell you, as my husband (the 14 year old boy who didn’t want braces) is living through the experience right now. His story began this past winter when he decided to check into getting his bottom teeth capped because they had ground down to the point of almost exposing the roots due to his misalignment of teeth. Much to his surprise, the dentist told him that in addition to his teeth being too crowded to get porcelain veneers or crowns, that he also had TMJ and would likely need full dentures at an early age. He told my husband to avoid this fate, he needed FULL ORTHODONTICS! NO WAY my husband thought. He is a business man and was humiliated at the thought of wearing "train tracks" for 3 years.  This is where the story gets interesting…The dentist after hearing "hubby’s" reaction said he had heard of a relatively new procedure called Fast Ortho, which was a  combination of oral surgery with traditional braces application for an expedited result. You see dramatic results in 3 months and complete the process by the 6th to 8th month; that’s it, straight teeth in just a few months. Now THAT he could deal with. The cost for the procedure in our case was about double the cost traditional braces.  I am about to share his journey that began last week in Dr. Chris Parks office, a young and cutting edge periodontist in Maryland Heights, MO. He is the only Periodontist in the St. Louis area performing this procedure. "Hubby" was his 6th case.

Ok, here’s where I have to warn you, there are some graphic images that are not for the faint of heart. Some of the photos contain some blood and show exposed bone and tissue. This is an amazing procedure so if you have a strong stomach, please read on…

Fast Ortho is a patented procedure that was introduced in May of 1998 at the 98th Annual Session of the American Association of Orthodontics. The actual company name is, Wilckodontics, Inc., which acts as a teaching mechanism to train and certify clinical specialists in the proper delivery of the Wilckodontics® System. The Doctor that my husband was recommended to had performed 5 previous procedures so my husband called most of them to hear from them their experience and results. All of them were thrilled with the results and every one of them said they would do it again. Most of the previous patients were back at work within 4 days of the procedure. That was all "hubby" needed to hear, he was ready to proceed. So, If you are ready here’s what the procedure entails….

(Last Warning…the photos will get more graphic as we go along!) We’ll start with the before surgery, after brackets photo. 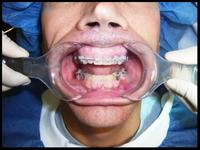 The process started for "hubby" almost 2 weeks ago (Thursday) with a trip to the Orthodontist office of Dr. Donald Ellit of Chesterfield, Mo. He prepared "hubby" by placing the brackets on his teeth. Clear brackets on the top teeth but because "hubby’s" bottom teeth were so small and crowded, he had to use the traditional silver brackets for the bottom as they are slightly smaller than the clear. Piece of cake. No pain, and hyped up for the big procedure that would take place the next day.

Friday morning, he took the prescribed medication (antibiotic, steroid and valium) and off to Dr. Parks office we go! Getting a little nervous now and the valium wasn’t kicking in yet, but ready to go.

After arriving, Dr. Parks proceeded with numbing the bottom teeth. The last few procedures that Dr. Parks performed, he did both top and bottom at the same setting. This time he opted to do one arch at a time thinking it might be easier on the patient and himself, since the procedure is usually 7 & 1/2 hours long and you are just under a regular local (novocaine) anesthesia. Yes, that’s what I said, just the regular shots for numbing like you get for a cavity. You are not put under a general anesthesia for this procedure. Now that the novocaine has been administered he is good and numb, and the gums now have to be completely cut away from the teeth and pulled down to expose the bone under his teeth.  The underside of the tongue also has to be cut to allow for the tongue to be lifted farther out of the way.

Now that everything is exposed and prepped, the bones around the roots of each tooth are cut to encourage the rapid movement when 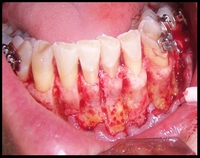 pressure is applied through the braces. Then a bone powder of sorts is applied to help with the regeneration of the bone tissue. After all of the sculpting is complete, the gums are stitched back into place. Phase 1 (bottom) is now complete. Now its nothing but a liquid diet until the stitches are removed. Phase 2 (upper) is planned in 4 days. Over the weekend "hubby" recovered enough to return to work on 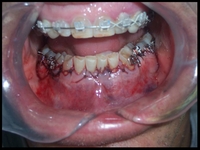 Monday. Tomorrow starts phase 2 and he is wishing now he would have done both arches together.

When the morning came for the uppers to be done, "hubby" was a little more nervous since he now knew what to expect. He comforted himself a little because the doctor told him the bottom was the worst of the two procedures since it entailed the tongue cutting too.

Unfortunately, this was not the case for "hubby". For some reason he was feeling it still during the procedure and more and more shots of novocaine were administered for 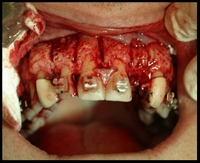 pain. He then reacted to the novocaine and became hyper sensitive. Doctor Parks says it was "hyper analgesic shock" due to the trauma

that his body was still processing. This simply means he was experiencing a heightened sensitivity to pain.

The next 3 days were pretty rough. He was reacting to his pain meds and getting into a depression. But Dr. Parks made a house call that lifted his spirits and releived his fear of infection (we have been very impressed with his concern and bedside manner). His swelling was a lot more intense with the second go around. By now the all liquid diet is adding to his depression (my husband is very thin and lives for food) so we had to come up with ways to have him swallow very small bits of food whole to ease his misery. No chewing allowed and no blended foods because the particles

could get caught in the stitches and cause infection.

Today, he went back for a final extra procedure due to how his teeth need to move (not everyone needs this extra step). Two small screws had to be placed above each canine tooth. Rubber bands will attach to these screws to replace the need for a night head gear. Still reacting to the hyper analgesic shock, he couldn’t sit through the procedure and only received one side today. The doctor and orthodontist have decided that he needs a longer recovery period before continuing with the second screw.

"Hubby" says if he had to do it again, he would have had them do it all at once. The 2 step method was too drawn out and too many trips back have dampened his spirits. Also, a big part for him is it extends the time period on the liquid diet. He sits and watches the Food Network and gets more and more distraught about his liquid diet.

That brings us up to date for now. We are 6 days post-op from phase 2 and "hubby went back to work! He is already seeing some movement on his bottom teeth! That’s always encouraging!!! I will post photos of his results as he progresses towards "Movie Star" teeth. If you have specific questions for the doctor, leave them in the comments and I’ll try to get the answers for you from Dr. Parks.

The details of this procedure is meant to encourage adults who need braces, not to scare you. There are avenues to a straight smile. If you always rebuffed the idea of braces due to the 2 to 3 years of having a "metal mouth" and the psychological impact it might have on you, then consider Fast Ortho as an option! Or better yet, do whatever is possible to get your kids in braces while they are still kids!